My friend Oscar was born in Guatemala and is of Mayan descent, and ever since we met back in college, I had an open invitation to visit his family there.  I finally joined him along with two other friends on a trip back in 2011. We visited several regions of the country, but the jungle-obscured ruins at Tikal were the highlight for me. 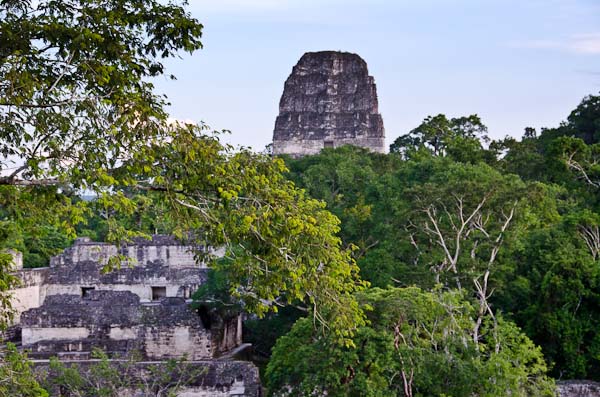 The jungle threatens to swallow the Tikal ruins

Our hotel (Hotel Tikal Inn), helped us arrange for an English-speaking guide. We chose a guided option that took us to the park for a sunset/night hike, followed by a hike at sunrise the next morning. It was an ambitious itinerary, but it was the best way to see the park in all its glory. 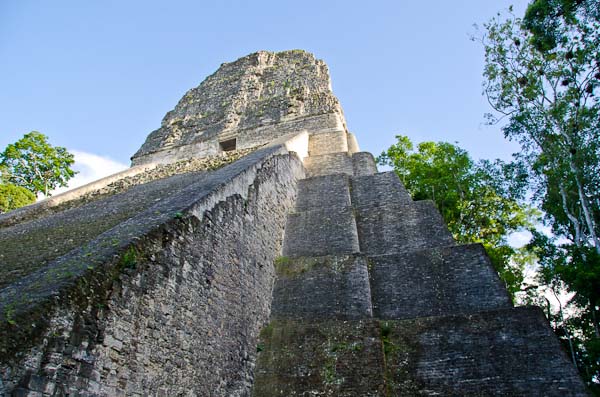 Sun sets on the ruins

On our first hike into the park, we were able to see several of the temples glowing in the light as the sun set.  Our guide explained to us the history of the Mayan civilization and showed us many secrets of the temples themselves, including the fact that successive kings actually built their temples over top of those of the previous king, signifying that each king was more powerful than the last.

He taught us some of the basics of the Mayan calendar, and why he was pretty confident the world wouldn’t end on December 21st, 2012 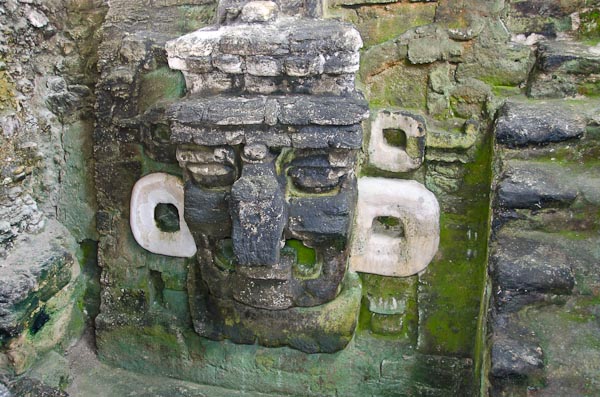 Sculpture of a face inside one of the Temples

We also saw the court where the Mayans played their ritual ball game where they used sticks to try to get a ball through a hoop set high on a wall.  The players were not allowed to use their hands, and the game usually ended when one team was able to get the ball through the hoop, not an easy feat.  The winners became instant heroes, honored with a great feast.  The losers, on the other hand, were often sacrificed to the gods, a practice thought to bring good fortune in agriculture and health. 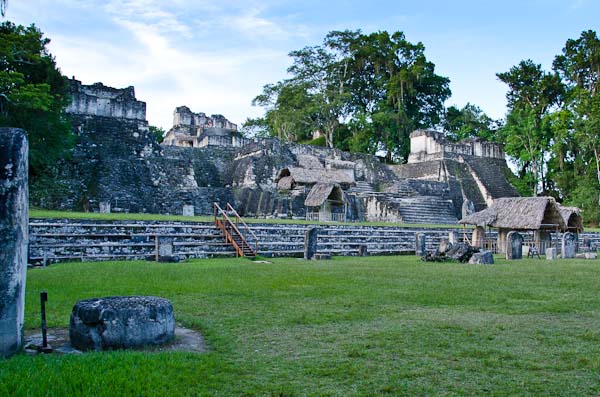 The view north from the main square of Tikal

After dark, the mood changes dramatically.  The creatures of the night take over.  Bats fly overhead, and as we lit our headlamps, we were in for a startling shock as we saw our beams reflecting in the eyes of the many thousands of spiders that were all around us, waiting for their next meal.  I felt as if I was now the unwitting participant in some Mayan night ritual.  I should probably mention that I have a deep fear of spiders, and just typing this paragraph brings me chills.  But it would get much scarier for me. 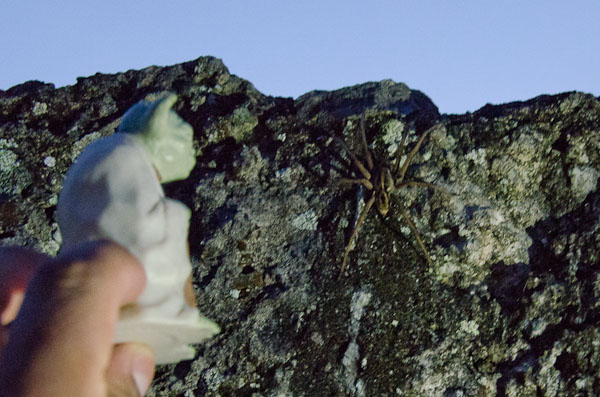 A giant spider! Save me, Yoda!

As we hiked back to the hotel, our guide spotted something.  He broke off a small stick and stuck it down a hole in the ground.  He slowly pulled the stick out of the hole, and after a few tries, he was able to accomplish his goal, as a giant tarantula emerged from his den.  I was mostly calm, as the spider was several feet away, and my sense of morbid curiosity could prevail over my sense of blood curdling fear.  But then one of my friends turned around and said, “Don’t step back.”  I looked behind me, and another tarantula was sitting right by my foot.  I had had just about enough of the jungle for the evening.

Of course, when I got back to the hotel and had a little time to shower and catch my breath, my friends had left a fake tarantula on my bed that nearly caused me to pass out.  They had a good laugh.  What a great bunch of guys!  (I need new friends.)

In the shadow of Temple IV, you can see Yavin, the site of the secret rebel base in Star Wars

It was not easy to wake up early the next day, but we wanted the chance to view the temples again at sunrise.  The plan was to see the sun come up from the top of Temple IV, where the first light would illuminate the other temples rising above the canopy.  We had to leave the hotel in pitch darkness and hike about 30 minutes into the park, finally climbing the rickety stairway to the top of the temple.  We found a seat on the steps, and we waited.

In some ways unfortunate, a dense fog completely obscured our view into the distance (the photo above is from sunset the night before).  However, I think this might have been a blessing in disguise for me, because instead of trying to get that perfect Star Wars photo over and over, the fog forced me to use my other senses.  In the way a Mozart masterpiece might start softly, slowly layering the voices of new instruments onto each other, the jungle awoke.

First, we heard only the sounds of our own shuffling as we tried to stay warm in the fog layer.  But the human beings got quieter as the insects, and then the birds, then the monkeys… And then the whole tropical forest joined up, as if part of some chorus conducted by the Mayan sun god himself.  I will never in my life forget those moments atop an ancient temple, listening to the sounds of the jungle that had taken back the land.  A toucan even perched in the tree just a few feet from us, and we watched him for several minutes. 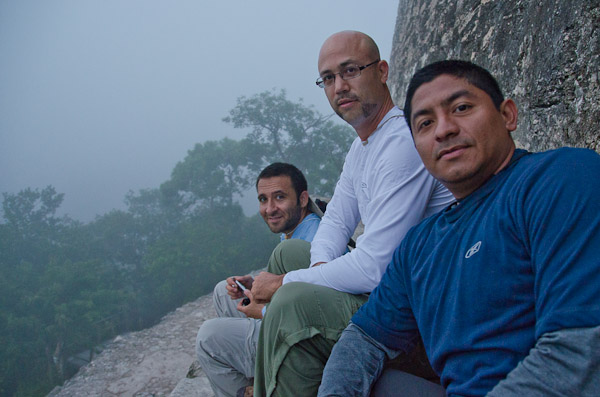 My friends in the fog at sunrise

Of course, what happened next was pretty unforgettable in its own right, and you’ll forgive me if I was shaken from my state of eternal inner peace.  Out of the corner of my eye, I saw something scurry out, having just crawled behind my back and continuing behind the back of my friend, Oscar.  “I saw something, get up,” I said to Oscar as we both stepped forward with lightning reflexes.  Underneath him was a way-too-big scorpion!!!  When coupled with the tarantulas we saw from the previous night, I now had my fill of arachnids for the trip.  It was yet another reminder that I was not at Disneyland.

After sunrise, we hiked around more and our guide pointed out something else that simply amazed me…  The ground is literally covered with ancient shards of pottery.  It is so plentiful that he actually welcomed us to take a piece home as a souvenir.  I didn’t take a piece myself, simply because I know how much damage people can do to archaeological sites by taking artifacts, but it was amazing to hold this pottery in my hand and think about how it might have been used, and about the people who used it.  My shard still had flecks of the original red paint that decorated the piece. 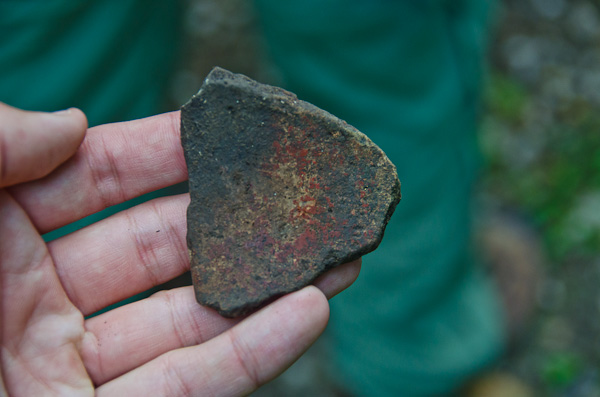 The pottery shard I found, note the red paint.

Scientists still have much to learn about the site, and you can be guaranteed that when you visit Tikal Guatemala they’ll have discovered even more about the history of this lost civilization.

Just watch out for the spiders!

Share8
Tweet12
Pin40
60 Shares
« Tips for Staying in a Hotel With Your Dog: Find Us at FlightNetwork
Trying Something New At The San Pedro Square Market »