After nearly 4 days on Easter Island, and the past 24 hours in Santiago, I find myself waiting for a flight and thinking about what we’ve seen so far.  While I think it might be hard to come up with two places more different from each other than Santiago and Easter Island, the common string that stands out most to me is how friendly everyone has been to us along our way, from the native Rapanui peoples on sleepy Easter Island, to the Chileans in bustling Santiago.  It has made this trip surprisingly easy so far.

Back on Easter Island

I think that if you’ve read the other updates on our trip so far, we’ve hopefully dispelled your notions that Easter Island is a bunch of big stone heads and nothing more.  In our time there, we barely scratched the surface, and there are additional opportunities for snorkeling or diving (where you can visit underwater Moai, likely landing in their final resting place due to natural forces such as tsunamis), and many more day hikes we could have taken.  And we barely even found time to relax on the beach! 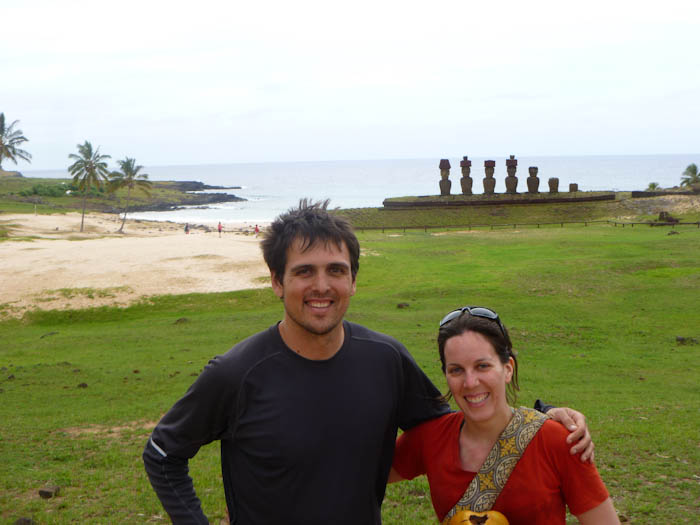 In Front of the Ahu at Anakeena Beach

I will never forget watching the sun rise over Ahu Tongariki, climbing into an underground lava tube (Ana Kakenga) and looking out through a window over the sea, or seeing “The Nursery” quarry at Rano Raraku where the Moai were carved from the rock and somehow transported over the rest of the island.  All these activities added to the fact that added flights from Lima makes it easier than ever to get to this once remote, mystical place. 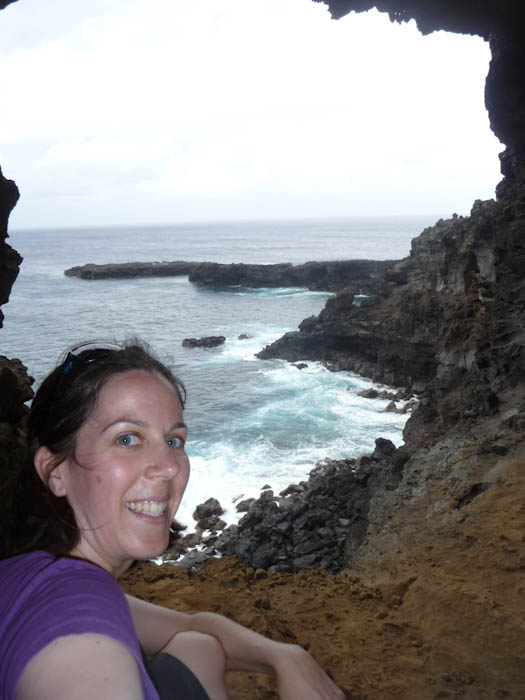 I wanted to quickly say hi to all our friends from Easter Island, Ryan from Milwaukee, Amy and Rheanna from the UK, Kari from Norway, and Eva from France.  We had a blast sharing our experiences with you.  Come visit us in California any time! 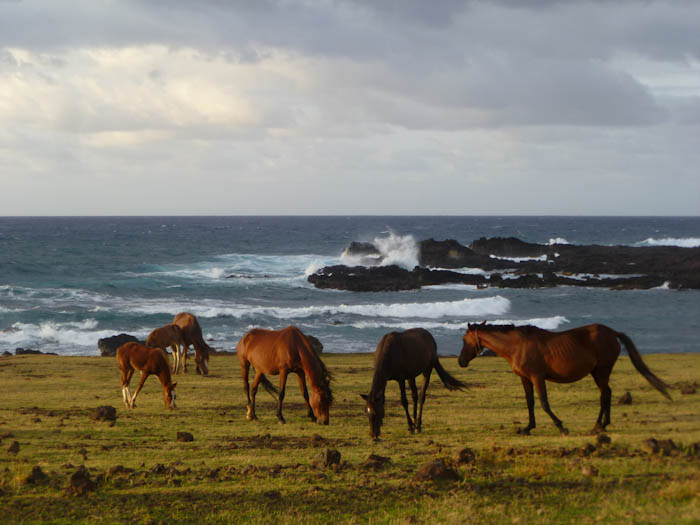 After having spent less than 24 hours in Santiago, I will resist relating any lasting impressions about the city or its people.  Amongst the traveling set, I think Santiago has long been considered a fairly uninteresting city.  Perhaps that is due to the architecture, which I would describe as a mix of a few colonial buildings sprinkled in between many square boxes that I’m guessing were “inspired” during the 70’s and 80’s Pinochet era.  Dictatorships generally mean bad architecture. 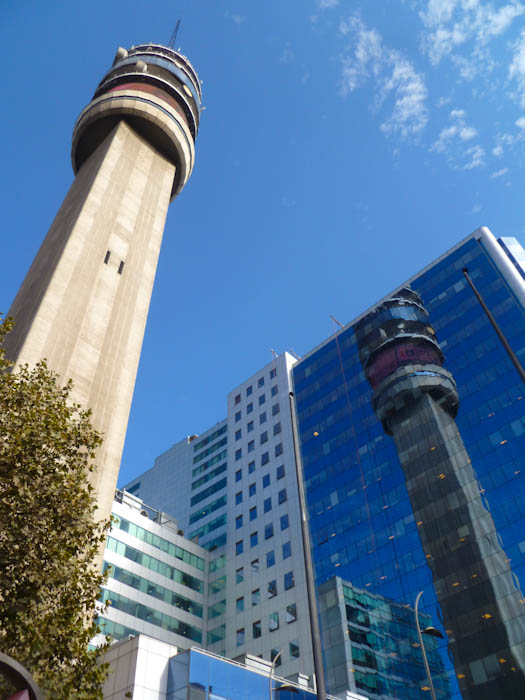 But I think that dull reputation is quickly disappearing.  On a Sunday in Barrio Brasil, we saw children entertained by a puppet show in the square, we sampled several different Chilean microbrews while sitting on the Café Paris patio, and I had a delicious salmon ceviche to go with my pisco sour at happy hour!  It was allllllllllright. 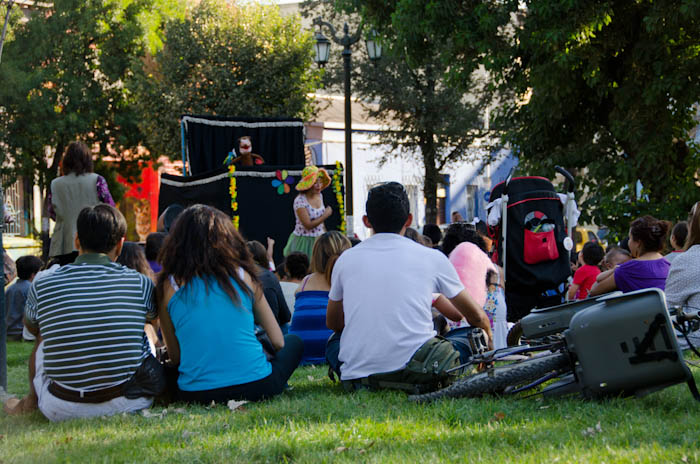 All around us, we saw a city that is very much alive, and I get the sense that the people understand their power to make change.  Between the student protests over public education that I’ve read about in the news, and the graffiti that covers the city walls, that change seems inevitable.  The Chilean youth appear to have found their voice, and have joined la lucha.  I hope the direction they choose leads them to a more just society. 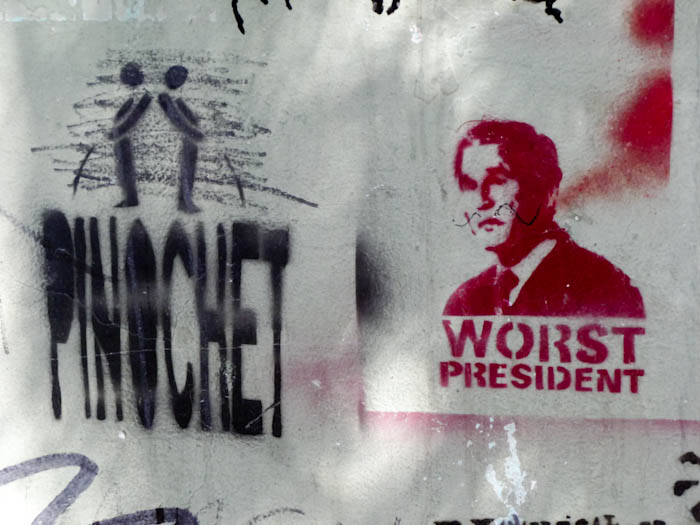 I was so glad to find these right next to each other!

At breakfast this morning at our charming hostel with a silly name (Happy House Hostel), we spoke with a French traveler who had spent the past 6 months in South America with plans for at least 6 more.  He described Santiago as “a trap.”  By that, he meant that every time he left, he found himself drawn back, and when he arrived, he found himself not wanting to leave.

Along these lines, I’m guessing that travelers will soon realize that Santiago isn’t what they expected, and are motivated to seek out what makes this place special.  I can’t wait to come back in a week and learn more about the history, and especially eat more food and drink more beer and cocktails.

Last, if you’re reading this as we take this journey (yes, mom, I’m talking to you!), our next stop on the trip is Patagonia, where we’ll be trekking through Torres del Paine Parque Nacional for 5 days.  It can get windy and rainy, so I’m hoping our weather is decent even though it’s toward the end of the season.  But we’re prepared for anything.  And of course, I just need the weather to behave enough for that one good picture and I’ll consider things a success.  But we’ll likely be off the grid until the 26th.

And one final post script…  On our plane, we flew over Torres del Paine and our seatmate and new friend, Jaime was able to snap some photos for us out the window.  We may see a lot during our trek, but we won’t catch this view. 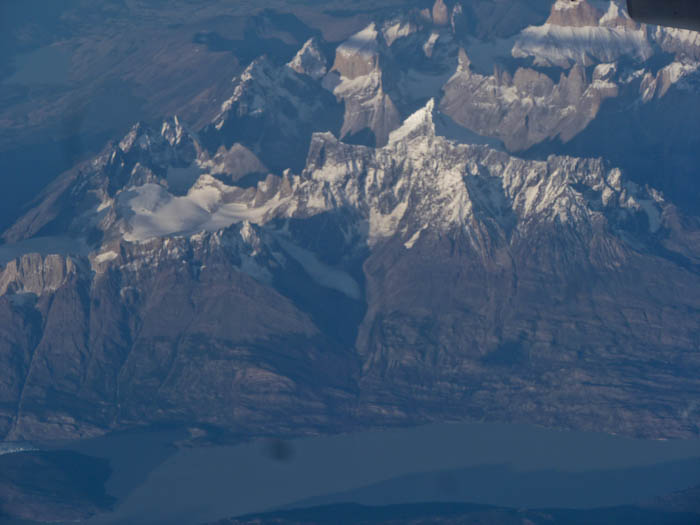 Torres del Paine from the Plane